Survivors: Learn about voting on our Plan and receiving compensation here.

The Boy Scouts of America (BSA) initiated its financial restructuring to equitably compensate survivors like you who were harmed during their time in Scouting, and we’ve remained steadfast in that commitment. We are closer than ever to fulfilling this pledge, as we’ve reached a critical point in our case by asking survivors to vote on the BSA’s Plan of Reorganization.

Importantly, in order to equitably compensate survivors through a Trust formed under the Plan to pay the claims of survivors, we need a substantial majority of claimants to vote in favor of the Plan. We believe that by voting to approve the BSA’s Plan, survivors will receive the compensation they deserve in the fastest, most equitable way possible.

With your support, this Plan is poised to establish the largest sexual abuse compensation fund in the history of the United States.

The official calculator to help you gauge your potential financial compensation is available here.

A Message from Eagle Scout and Survivor Jason Lee

Fiction vs. Fact about the BSA’s Plan 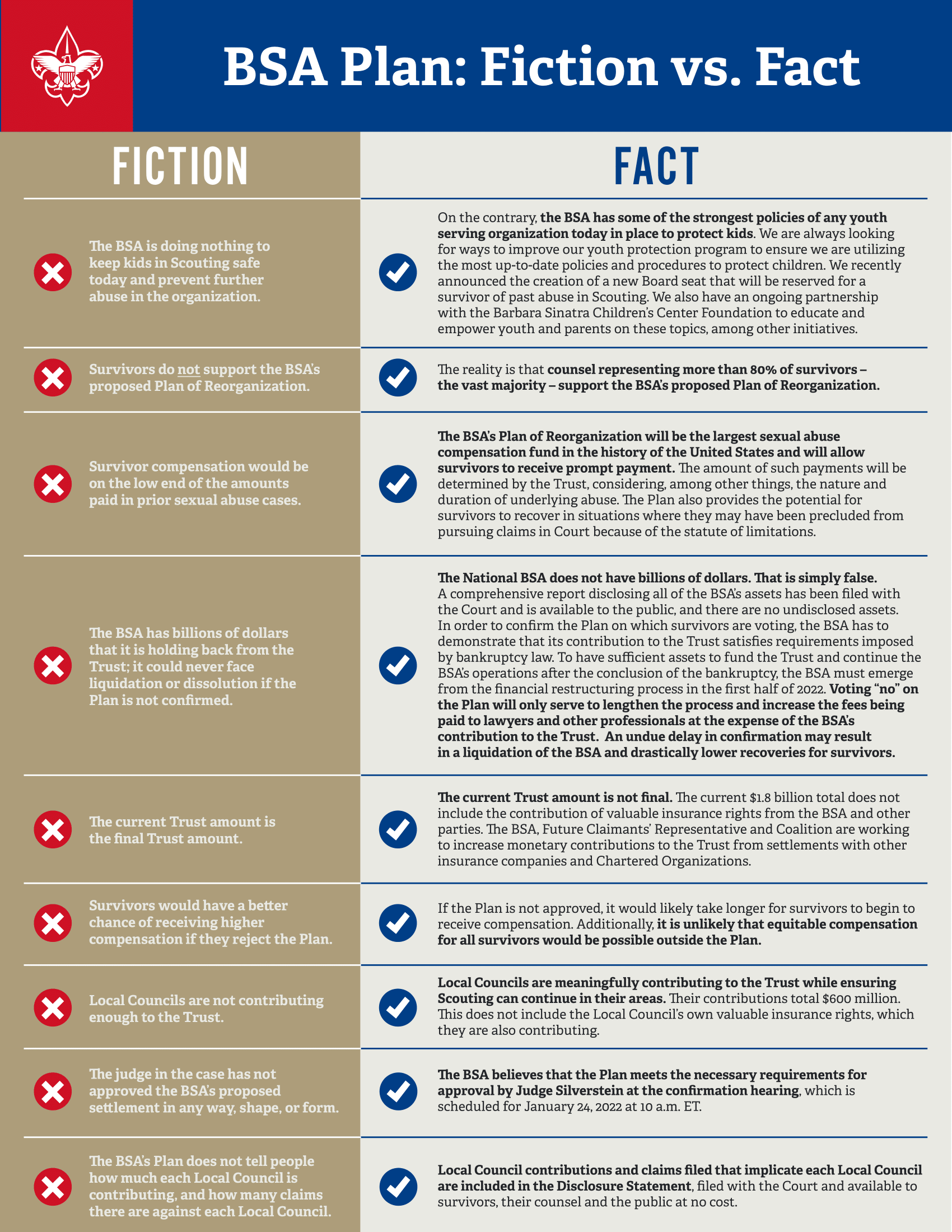 The official calculator to help you gauge your potential financial compensation is available here.

Our Commitment to Youth Safety

Nothing is more important than the safety and protection of children in our Scouting programs – it is our top priority. And today, Scouting is safer than ever before. We are aware safety is not a static issue, and as a result, the BSA is always looking for ways to improve our youth protection program to ensure we are utilizing the most up-to-date policies and procedures to protect children.

The BSA is pleased to work with the Coalition of Abused Scouts for Justice on the creation of a new Board seat that will be reserved for a survivor of past abuse in Scouting following the Effective Date of the BSA’s Plan of Reorganization. We intend to continue listening to survivors, evaluating our youth protection procedures, and working every day to make a positive impact on young people and communities across the country.

The BSA has in place some of the strongest youth protection policies found in any youth-serving organization, which are continually evolving as informed by respected experts in the fields of child safety, law enforcement, and child psychology. The BSA’s multi-layered safeguards include the following measures, all of which act as barriers to abuse:

Questions About the Restructuring and Filing a Claim

Reporting Suspicions of Abuse in Scouting

If you are a survivor of abuse, you should immediately contact the police to report the abuse. We also encourage you to contact the BSA.

Have a question?
MENU